We want to help you find the perfect car that fits your budget. Please adjust the options below so we can estimate the most accurate monthly payments.

How much will you put down?

NEW YORK, NY (March 21, 2017) — Robb Report, the global voice of real luxury, has revealed the winners of its highly anticipated Car of the Year competition. For the April issue of the magazine, which hits newsstands today, Robb Report’s annual extravaganza pitted 13 cutting-edge creations—from Aston Martin, Jaguar, Lincoln, Cadillac, Mercedes-AMG, and more—against one another in a real-world competition for the coveted title.

Now in its 15th year, the annual invitation-only multi-vehicle event brings a dedicated group of Robb Report readers together to the rustic roads of California’s Napa Valley to test-drive, discuss, and ultimately decide which of the automotive industry’s most spectacular new sports and luxury models is most deserving of the title Robb Report Car of the Year. For the first time ever, Robb Report crowned two winners: The Lamborghini Huracán Spyder and the Porsche 911 Turbo S shared the title, with Aston Martin rounding out the top three thanks to an impressive showing from the DB11.

“The annual unveiling of Robb Report’s Car of the Year is one of the most anticipated events in the automotive community,” says Brett Anderson, editor in chief. “After a hard-fought battle between three top-ranking contenders, our judges turned in the final round of votes, which—for the first time in the history of this event—gave us two Car of the Year winners. Given that roughly 150 judges participated, a tie is an extraordinarily unlikely outcome; but then, the vehicles in question are themselves extraordinary. Choosing between the Lamborghini Huracán Spyder and the Porsche 911 Turbo S is no mean task. As our automotive expert Robert Ross notes, ‘Car lovers might be wise to acquire each, because both, though so different, are so rewarding to behold and drive.’ Clearly, our judges agreed—and crowned these models Robb Report’s newest kings of the road.”

In addition to showcasing behind-the-scenes photos and exclusive videos from Robb Report’s Car of the Year competition—which brought together a roster of ardent automobile enthusiasts including fashion icon John Varvatos and football legend John Elway—RobbReport.com offered up the opportunity for readers to cast their own votes and choose their personal favorites. See which car topped the online poll in 2017 at RobbReport.com/COTY.

Rounding out the April issue are features that bring the wide world home: We look at Amsterdam’s au courant culinary scene, where leading local chefs are cranking out inventive dishes anchored in Dutch traditions. And Robb Report takes to the Nile for a cruise on an elegant new riverboat that just might offer the ultimate travel experience in Egypt. Plus Peter Loughrey, founder of Los Angeles Modern Auctions, explains why true design buffs should seek out works by George Nakashima in Robb Report’s monthly Forward Buy column. 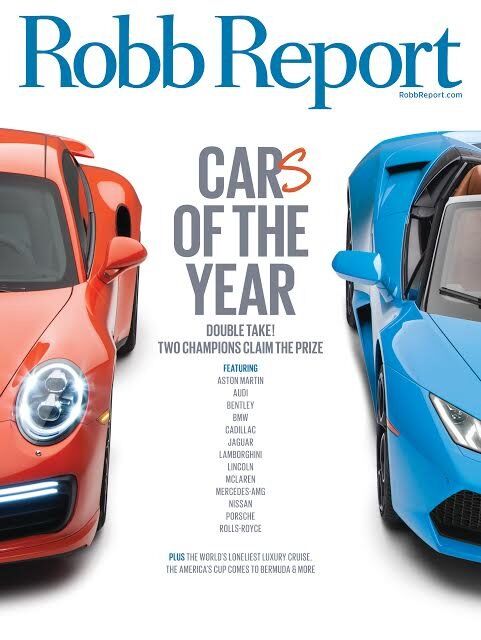